ARTISTIC AND AESTHETIC EDUCATION OF STUDENTS BY THE MEANS OF THE NATIONAL ARTS AND CRAFTS: THE TATARSTAN REPUBLIC EXPERIENCE

The research is devoted to the problem of aesthetic education in contest of moral education. Aesthetic education is studied in context of Russian educational reformation (The end of ХХ – the beginning of XXI century) and growth of national consciousness and spiritual revival of the people. This period is suggested as an ideological return to the national cultural and historical traditions. This period is characterises by the rise of public activity towards national heritage and traditions of folk culture and art. Authors suggest and prove that the separation of education and national culture, as soon as lack of training in national-cultural issues, leads not only to local culture regression but to certain problems in international relations and national egoism. Only spiritually and morally enriched education, that means not only local language study, as it is often done in Russian Federation, but also study of traditional customs, art and values of cultural and historical traditions of local nationality (in our research Tatars), allows to teach children to appreciate the human values and spiritual achievements of other nationalities.

This means that today the educational process at schools has to be inherent in the nature of the identification of possible and effective forms and methods for the implementation of the students education on national traditions and art, as the most valuable thing for centuries, formed by the wisdom and culture of the people, should become a part of the upbringing and education of the modern school.

The authors developed the system of artistic and aesthetic education of students by means of Tatar decorative and applied arts that promote artistic and aesthetic education, development of artistic and creative abilities of students, on the basis of national consciousness of personality development. This system creates the sense of humanity of students and develops there interethnic attitudes to others. This system was implemented at a number of schools where developed course has welcomed by authorities. Students have studied a corresponding material of the Tatar arts and crafts together with their parents and teachers. The results have shown that not only the level of students’ spiritual and moral education, aesthetic education has risen. The growth of their tolerance to other nation’s representatives from the position of understanding of prevention every national culture peculiarities became the most amazing. 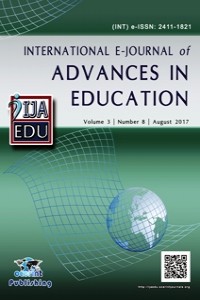